My favourite Holiday by far is Halloween: it’s my happy time of the year. I love watching people being dressed like vampires, ghouls, witches and other creatures from the spirit world. For me it is the perfect time to gather round the television and watch horror movies until deep into the night, or curl up next to the fireplace to read comic books that to me have a nice Halloweenish flavour to them. If only I had a fireplace… Anyway, here’s my top 5 favourite ‘Halloweeny’ comics. 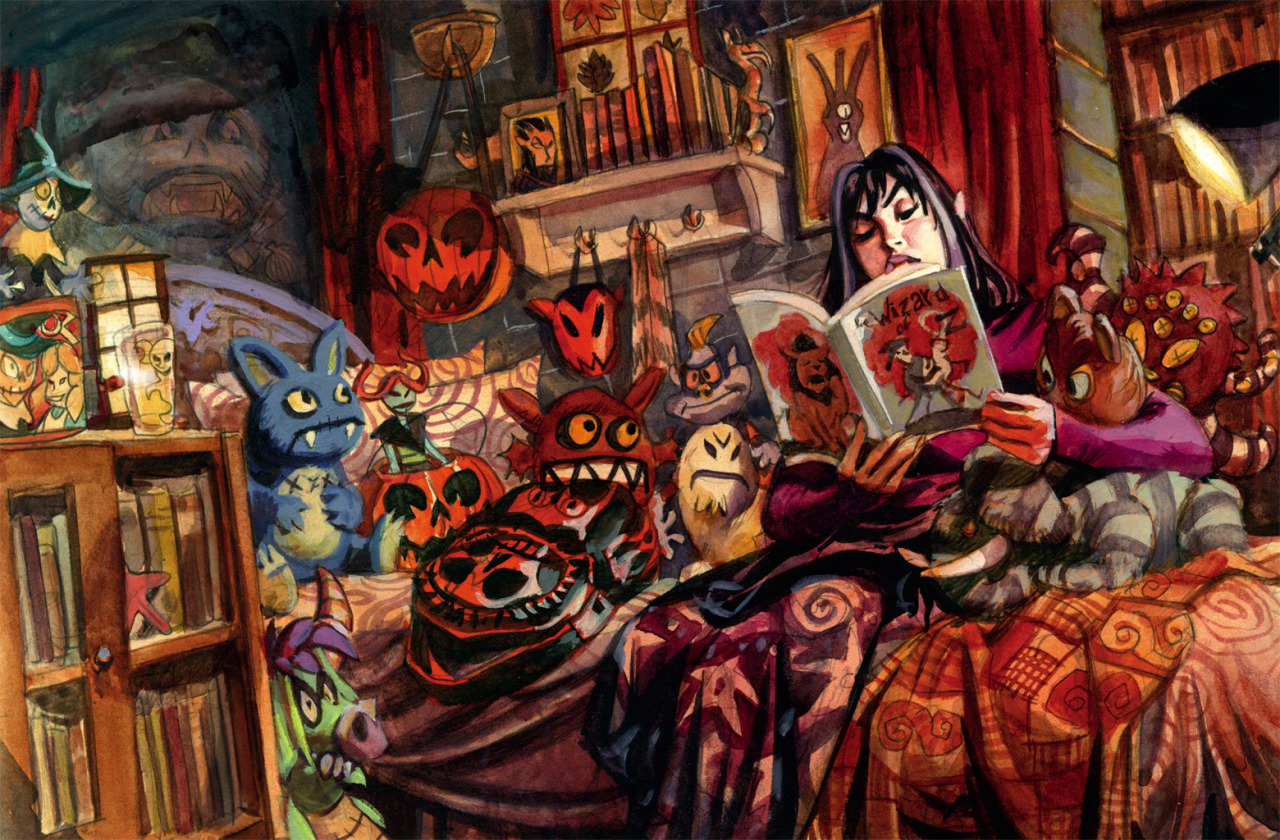 To me, it doesn’t get more Halloween-esque than the comic book series Nocturnals by American writer/illustrator Dan Brereton. Taking place in the fictional California town Pacific City, Doctor Horror and his band of misfit night creatures are fighting against evil vampire street gangs, hill billy swamp witches and robotic hitmen that work for the mob.

Doctor Horror is a scientific genius, master of the occult and father of Eve, aka Halloween Girl. Halloween Girl not only dresses like it’s Halloween every day, she also carries a plastic bucket in the form of a pumpkin head that contains toys that are possessed by spirits. Whenever Eve needs help, the toys come to life and transform into monstrous versions to protect her. These spirits also communicate with Eve providing information from the spirit world.

Both dad and daughter are natives from another dimension. They travelled to earth after their native planet got overrun by the Crim: parasitic squid like creatures that could have walked out of a H.P. Lovecraft story. Unfortunately the Crim have also reached earth and team up with the malicious Narn K Corporation. This powerful bioengineering firm specializes in controversial experimentation and covert weapons development, and also creates animal-human hybrids. Some of these hybrids have joined Doc Horror’s group. Such as Firelion: a big guy that has the ability to conjure and control fires and Komodo, a young animal-human hybrid. He’s also known as Dragon Boy because, well, he looks like one.

Brereton mixes elements from gangster and horror stories, science fiction and Halloween lore into deliciously and beautifully painted adventures that breathe the spirit of Halloween. 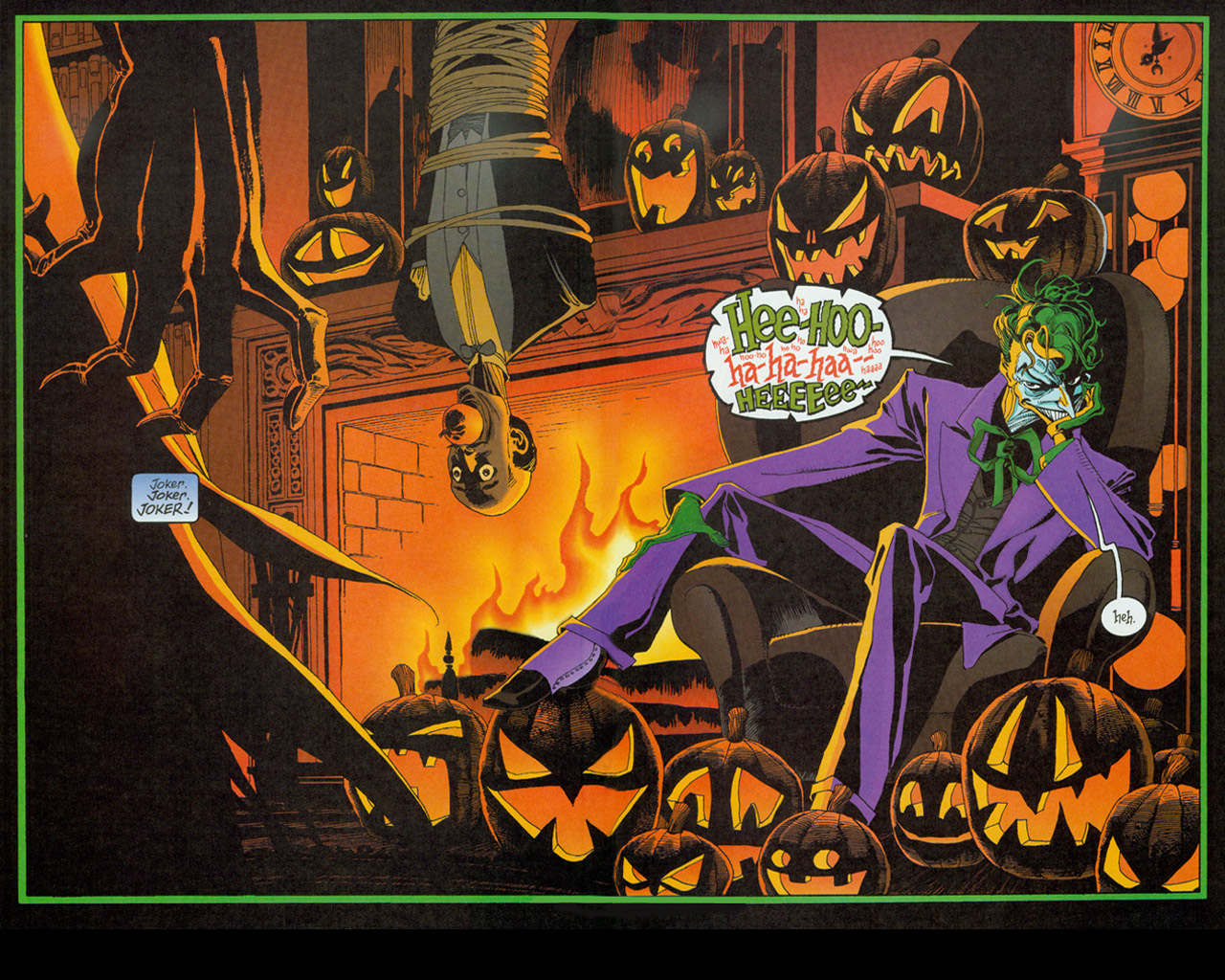 One could argue that with all the weird costumed villains running around Gotham City, living there must feel like it’s Halloween every day. Therefore, comic book stories about Batman have to be part of this top five. Luckily for us, there are a couple of great Batman stories connected to the holiday.

Before the creative team of writer Jeph Loeb and artist Tim Sale made the impressive Batman story The Long Halloween, for three straight years from 1993-1995 they cut their teeth on three Halloween Specials, that were collected as Batman: Haunted Knight. All three stories take place in the early days of the Dark Knights career, before he hooked up with the Boy Wonder, and all three stories take place on Halloween, or the days surrounding the holiday.

In Fears Batman is trying to hunt down the Scarecrow and his crew are knocking out power grids so they can loot the city in the dark. The Scarecrow is an interesting villain because he uses people’s fear as a weapon, just like Batman is trying to evoke fear into criminals. In this story Batman has to deal with his own fears while he’s being trapped in a large maze with poisonous thorns, while Bruce Wayne has a new love interest that keeps a dark secret.

In the story Madness Batman is dealing with the Mad Hatter who kidnaps children to host a very twisted tea party. A young Barbara Gordon, James Gordon’s adopted daughter who later becomes Batgirl, is one of the victims and chosen by the Hatter to play Alice.

The final story Ghosts is Loeb’s reworking of the classic A Christmas Carol: Batman is visited by the ghost of his father, Poison Ivy, The Joker and Death, trying to get the message across that Bruce should be concerned about the legacy of Bruce Wayne and not only focus on his work as Batman. After all, Wayne and his money could do a lot of good for the world.

There’s a great Halloween-esque atmosphere in Haunted Knight – in a way even more so than in The Long Halloween since that story takes place on 12 different American Holidays, and just starts on Halloween. Also Loeb and Sale are able to reveal something new about Bruce Wayne and the night his parents were killed. After more than 75 years of Batman stories, that’s quite a feat.


The series Locke & Key revolves around the Locke family. After the brutal murder of the father, the three siblings and their mother move to their ancestral home in Lovecraft, New England. The mansion is called Keyhouse and has magical keys and doors, giving the bearers of the keys magical powers. For instance, one of the keys gives you the power to temporarily die and turn into a ghost. Another key changes your sex. The Locke family will soon will find out that a devious demon, kept captive on the grounds, also has its eyes on the keys and is willing to shed blood to get them.

Author Joe Hill (yes, Stephen Kings’ son) gives an original twist to the haunted house theme and treats us to very rounded and likable characters. The three Key kids have a hard time dealing with the murder of their father and all of them do this in their own way. These characters imbue the horror story with a lot of heart.

While not really a story revolving around Halloween, Locke & Key is a must read for anyone who likes to be scared by a very well crafted and hellish comic book. Perfect reading for a lonely Halloween eve. 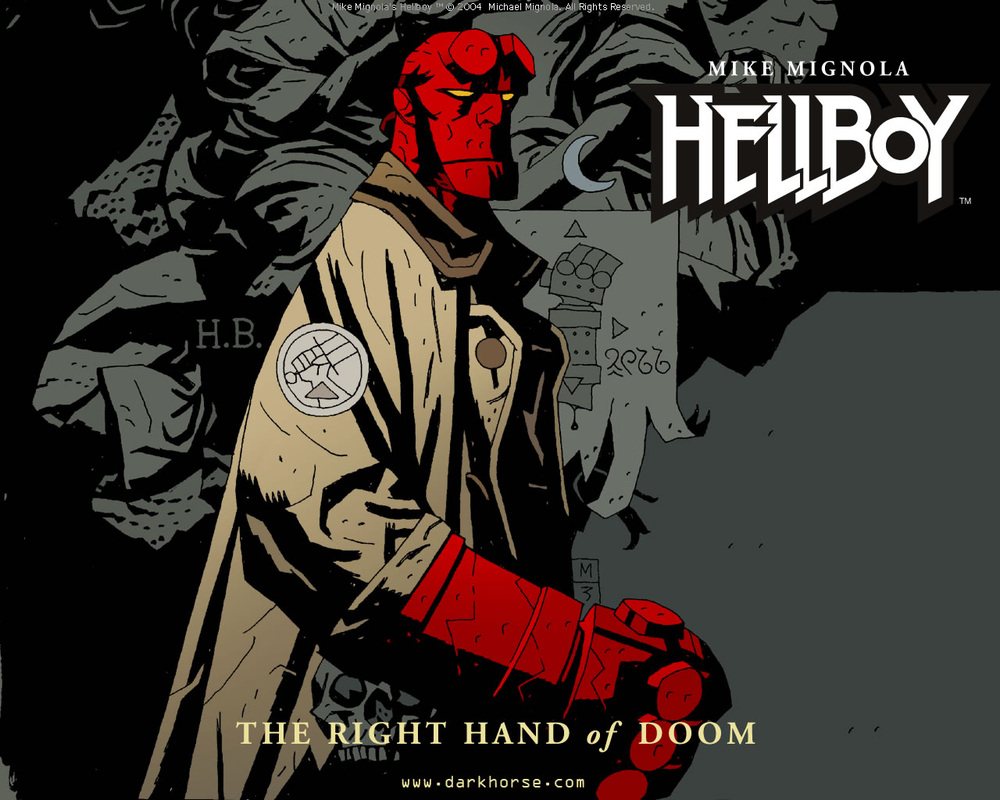 One of my favourite comic book series of all time and one that has a distinct Halloweenish feel to it, is Hellboy created by Mike Mignola in 1993.

As an infant demon Hellboy was summoned from Hell to Earth by Nazi occultists and Rasputin to unleash the Apocalypse. This summoning took place in 1944, the last days of the Second World War. Hellboy was found by Allied Forces and raised by Professor Trevor Bruttenholm. He’s now an adult, although he ages a lot slower than humans do.

Although Hellboy, with his red skin, cloven hooves for feet, an over-sized right hand made of stone and horns growing from his head, looks like a demon from hell, he’s a good guy fighting the forces of evil together with the an international agency called the BPRD (Bureau for Paranormal Research and Defence). Bruttenholm whom raised Hellboy as if he was a normal boy, founded the agency. Some of other members of the BPRD are strange creatures themselves, such as Abe Sapien, an amphibious man and Johann Kraus, an ectoplasmic physical medium. Together they fight against ghouls, monsters, ghosts, vampires and Nazi’s.

Mignola (and other writers and artists) combine superhero antics with the supernatural and folkloristic elements, creating a wonderful, somewhat goofy, Halloween-esque world. If it ever gets to too dark or horror like, Hellboy’s dry wit will always lighten the mood. Mignola’s expressionistic drawing style sets the right dark mood in which to visualize the stories.

‘I was born in Denmark 1978. I write and direct television shows for kids. I have a set of twins and not much time for anything. But when I have time I draw monster drawings on post-it notes… it is a little window into a different world, made on office supplies.’ This is how John Kenn Mortensen introduces his sticky monsters: a wonderful collection of Halloween-esque creatures and creepy monsters, drawn on the famous yellow post-it notes.

The creatures sometimes resemble something out of a horror story or nightmare, other times they look more like overgrown Muppets. Each drawing seems to contain a whole story and sparkles the imagination. Mortensen creates a world where kids and creepy monsters take centre stage and offers perfect Halloween ‘Bat’-time reading.

I wrote this top 5 two years ago for Submarine Channel. These are still my favourite Halloweenesqe comics. However I am contemplating writing about recent discovered comics that I liked a lot and fit within the theme of Halloween. To be continued.
Originally published on October 25, 2017 on HalloweenCult.com.

‘I was born in Denmark 1978. I write and direct television shows for kids. I have a set of twins and not much time for anything. But when I have time I draw monsterdrawings on post-it notes… it is a little window into a different world, made on office supplies.’ Zo luidt het voorwoord van Sticky Monsters, een verzameling tekeningen van John Kenn Mortensen dat in 2012 werd uitgegeven door Square Peg. 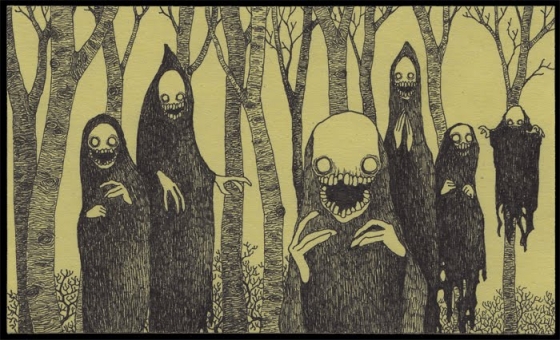 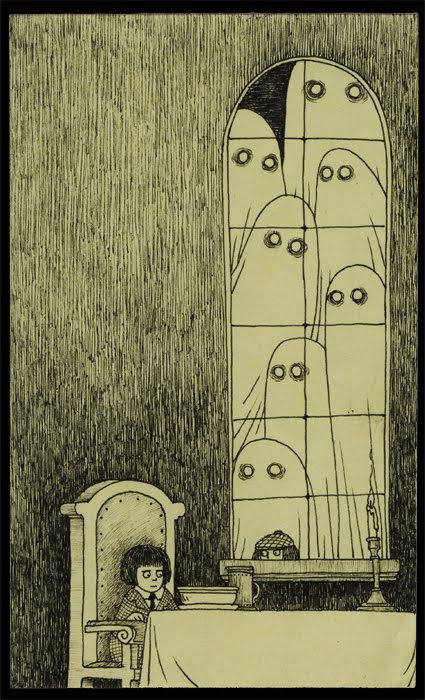 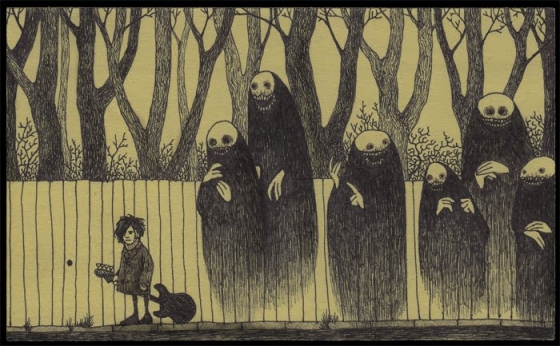