A while ago I wrote about writer Christ Claremont and his contributions to the X-Men universe. Since the new X-Men film, Days of Future Past, is partly based on Claremont’s story by the same title, I thought it would be nice to read the comic before watching the movie. 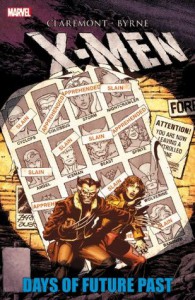 Days of Future Past was originally published in The Uncanny X-Men #141 and #142 in 1981. The storyline alternates between the (then) present year of 1980 and 2013, at the time a date far into the future. 2013 is a dystopian future in which mutants are incarcerated in internment camps. A lot of the X-Men have lost their lives fighting the Sentinels: enormous robots that have the North American continent under complete control. Originally activated by the American government to eliminate the mutant menace, the Sentinels hunted not only mutants but all superheroes and villains. Now the rest of the world threatens war against the Sentinels, which could mean a nuclear holocaust and the end of the world all together. An adult Kate Pryde transfers her mind into her younger self, the present-day Kitty Pryde, who tries to convince the X-Men to help her prevent a fatal moment in history that triggers anti-mutant hysteria and will lead up to the dystopian future of 2013. Rachel Summers, who played a major role in X-Men: Ghosts, plays a small but instrumental part in this adventure.

It was great revisiting this classic and well-written storyline from the early eighties. Especially since Canadian comic book artist John Byrne was the artist to bring Claremont’s scripts to life at the time. Later on Byrne would write and draw highly regarded stories about The Fantastic Four and revitalise the Man of Steel. At this juncture in his career he and Claremont worked on The Uncanny X-Men, then one of the most if not most popular superhero comic book. Soon the team split because of creative differences: Byrne didn’t like Claremont’s characterisations of the characters. In Days of Future Past however, none of the animosity is noticeable.

Another treat when it comes to reading old comics is to see the fashions of the time, be it in the decors or the way people dress.

The story is collected in a trade paperback containing Uncanny X-Men 138-143 and X-Men annual #4 which is illustrated by John Romita Jr. The collection starts with the funeral of Jean Grey, moving on to an interesting story of the X-Men and Doctor Strange being trapped in a dimension quite similar to hell. Then Wolverine and Nightcrawler team up with Canadian superhero team Alpha Flight to capture the Wendigo, and… Well, why spoil all the storylines in advance? Needless to say: this trade is a must-read if you like the X-Men and want to see how the movie differs from the original comic, which it does quite a lot judging by the movie trailer, which shows it is Wolverine and not Pryde who tries to save the future by travelling to the past.