Trees, volume 1: In Shadow by Warren Ellis (Transmetropolitan, The Authority) and Jason Howard is something else. Trees is a great science fiction story that presents a new perspective on the theme of alien-invasion. Like all good science fiction, Trees is an exploration of human nature in alienating and trying circumstances. 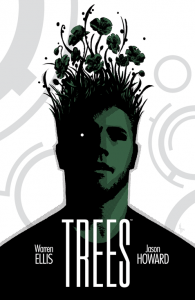 Ten years ago we discovered there is intelligent life in the universe: large black obelisks came down from the sky and landed on different places on earth. These big shapes wrecked their surroundings wherever they landed, destroying whole city blocks. Humanity panicked, but ‘the trees’ as people call them all but ignored humans all together. They don’t recognize us as intelligent or alive. Basically they just stand there, sometimes dumping toxic waste on their surroundings.

Now, ten years later, people have accepted these ‘trees’ and life goes on as well as possible. Writer Warren Ellis focuses on five locations on earth to show how the presence of the trees has changed our lives and how people adapted to them. In China a young artist arrives in the special cultural zone of a city under a tree and starts a journey of self-discovery. In Italy a young woman under protection of her boyfriend, the leader of a fascist gang that rules the city, meets an older man who will teach her survival skills so she can move up the social ladder. In Svalbard, one of the members of a research team is about to discover that the trees may not be dormant after all. The Somalian president starts placing artillery on the trees to demonstrate his military power, and in New York a Democrat is running for mayor in a city that’s been utterly transformed when the trees landed – Manhattan flooded when the trees landed on the cityscape.

In the first eight comics that are collected in Trees, Volume one: In Shadow, Ellis focuses most on the young artist, the Italian woman and the research team. Rightly so, because these three storylines concentrate on the characters and their development, whereas the other plotlines are more concerned with the politics of a world covered by the trees. At the moment they seem less interesting than the more personal storylines, but my guess is the political issues will be explored in later comic book issues.

I especially liked the story about Tian Chenglei, the young artist who is the new arrival in the city of Shu, a special cultural zone in China. Chenglei tries to find his place within a community of free thinkers, artists, homosexuals and transgenders and starts to explore his own sexuality. 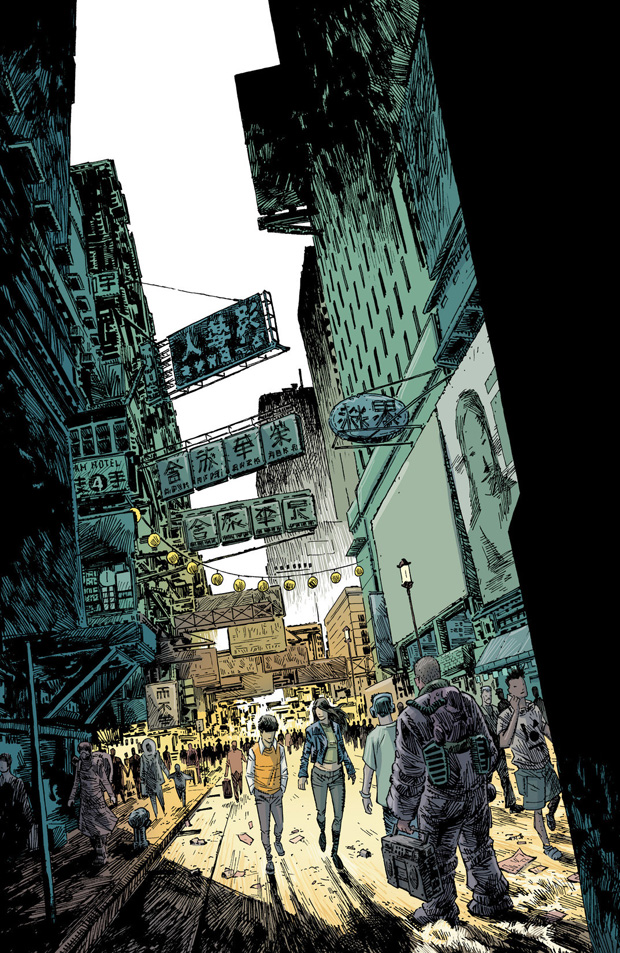 Jason Howard‘s artwork has an energetic feel to it. Howard’s love for cross-hatching gives the art a sketchy kind of look, while at the same time he gives a detailed impression of the scenery. All major locations in the book have their own distinctive look and feel, and these settings really sell the story. For the facial expressions Howard seems to use a sort of short-hand: they sometimes are lacking subtlety.

At first glance the cover of Trees reminded me of the film poster of David Lynch’s Eraserhead with Jack Nance wearing that goofy haircut, but although the trees are weird, Ellis’s story isn’t as strange as any of Lynch’s films. Trees isn’t less fascinating, though.

One reply on “Review: Trees by Warren Ellis and Jason Howard”