On July 22nd 1991 serial killer Jeffrey Dahmer was arrested for the murder of seventeen young men. An inmate killed him on November 28th three years later. In the highly compelling and original graphic novel My Friend Dahmer comic book artist Derf Backderf looks back on his high school years and his friendship with classmate Jeffrey Dahmer. 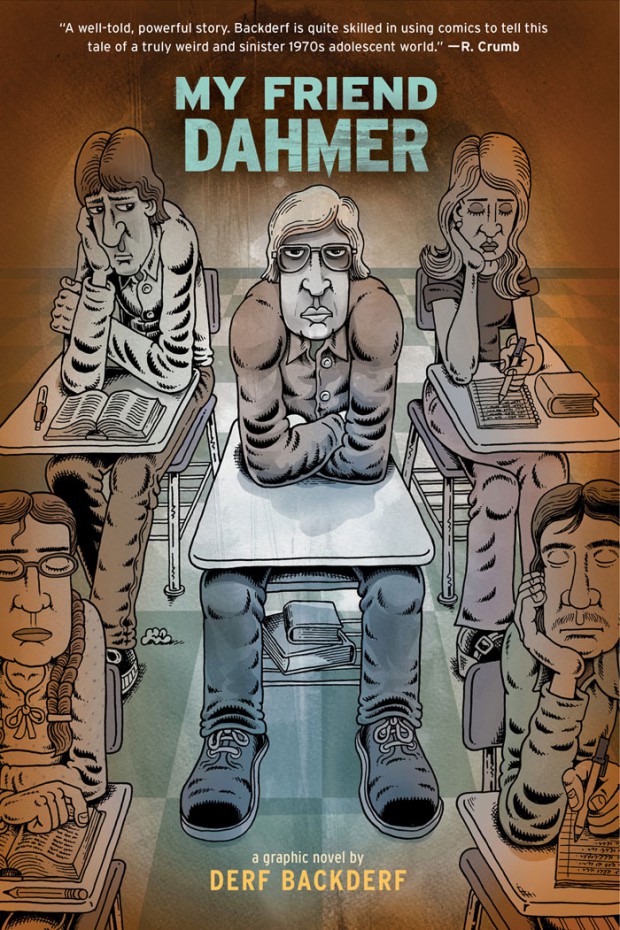 The weird kid
Backderf shows that Dahmer lived an isolated life during his high school years in the mid-seventies. Classmates thought the tall guy with glasses was quite strange: Dahmner threw fake epileptic fits and mimicked the slurred speech and spastic tics of someone with cerebral palsy. Dahmer’s act made him somewhat of a celebrity in school, or a mascot, as Backderf describes it. Backderf himself was part of the so-called Dahmer fanclub, imitating his movements and Dahmerisms with his friends. The high point of this act and Dahmer’s questionable celebrity status at school would be a Saturday in which schoolmates paid Dahmer to act this way during a visit to the mall. The students would look on from a short distance as Dahmer freaked out innocent shoppers and shop personnel. 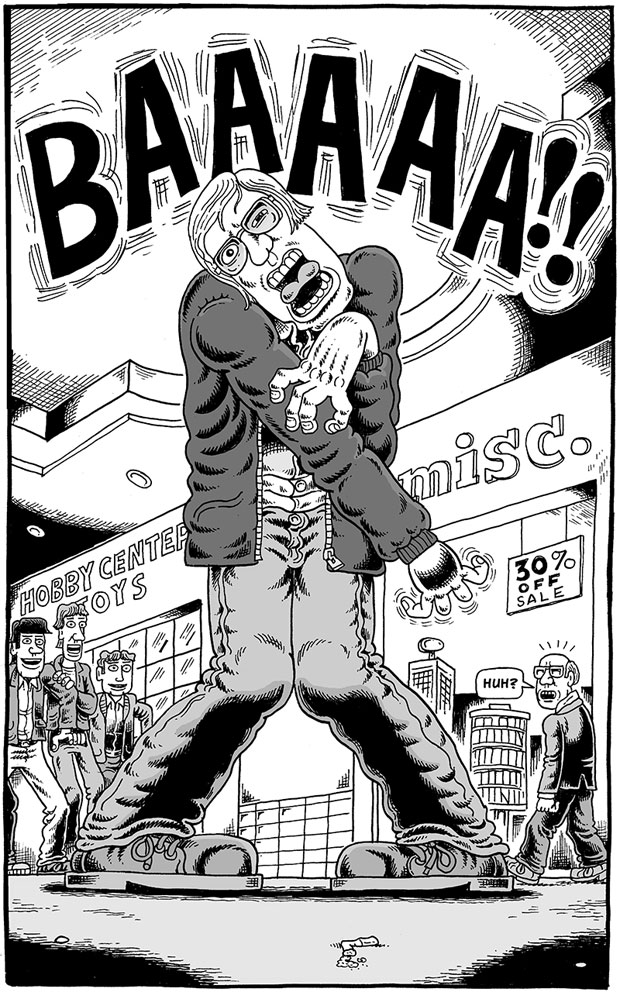 Later Backderf would discover that Jeffrey was imitating his mother, Joyce Dahmer, a woman plagued with depression and who had terrible fits. Dahmer’s home life wasn’t really pleasant: his parents fought most of the time until they decided to get a divorce, which became rancorous. Busy with their own problems they ignored Jeffrey all together, and he kept his homosexual tendencies to himself. He kept them hidden from everyone, but that wasn’t uncommon in the seventies. Of course, being gay doesn’t make one a serial killer, but when Damher fantasized about male lovers, they were dead and he had sex with their bodies. In Junior Year of high school Jeffrey took to drinking. Knowing too well his sexual urges were sick and twisted, he tried to dull these urges with alcohol.

‘How did he get away with being stinking drunk during school hours?’ Backderf asks in his graphic novel. ‘It still blows my mind. Every kid knew what Dahmer was doing… But not a single teacher or school administrator noticed a thing. Not one. Where they really that oblivious? Or was it that they just didn’t want to be bothered?’

Backderf makes a case for the adults being absent one way or another as the reason Dahmer’s descent into becoming a murderous monster was never noticed by anyone. ‘”I can’t say there were any signs he was different or strange,” one of the school guidance counselors would later state’, Backderf writes. After graduating high school Dahmer got even more isolated and shed his humanity forever. Soon he would pick up an innocent hitchhiker who became his first victim.

Cult classic
Backderf worked on this story for years. He self-published a comic about Dahmer in 2002. That 24-page story has become something of a cult classic and got nominated for an Eisner Award. Still, Backderf wasn’t really happy with that version of the story. Because of the 24-page limit, he had left a lot of stuff out, and that’s why he decided to make a full graphic novel. After becoming a more skilled artist by making his graphic novel Punk Rock & Trailer Parks and doing extensive research – talking to dozens of former classmates and teachers, reading FBI and police files and interviews with Dahmer – he started on My Friend Dahmer.

I found the book to be very fascinating. How often do we get to know a serial killer up-close through the eyes and memories of one of his classmates? There is an interesting tension between the complex and nuanced way Backderf tells his story and his somewhat crude and cartoon-style drawings. Backderf style works somewhat as a comic relief and at the same time points out that what we get here is his side of the story, his vision on Dahmer’s youth.

Interestingly Backderf doesn’t show any of the murders. Maybe that’s because he didn’t want to please those readers with a morbid curiosity. But maybe part of the reason is that Backderf could never see his odd high school friend as the killing monster capable of such atrocities.

Personal appearance of Backderf in ABC
It’s a question I like to ask the comic book artist, and on Sunday the 15th I will. Derf Backderf will be making a personal appearance at the American Book Center in Amsterdam that day at 15.00 hours, where I am going to interview him. The audience can ask questions as well. I hope to see you there.

3 replies on “Review: My Friend Dahmer by Derf Backderf”