Peter Pan by French comic book artist Régis Loisel has been a wonderful reading experience. It’s been a while a graphic story was able to suck me in with great art and ditto storytelling but Loisel’s Peter Pan more than lived up to my expectations.

First of all, Loisel’s graphic novel is not a mere adaptation of J. M. Barrie Peter and Wendy, the classic story that has been adapted numerous times and itself was Barrie’s adaptation of his own stage play Peter Pan, or The Boy Who Wouldn’t Grow Up. Loisel has made a sequel to Barrie’s novel in which he relates the origin story of the beloved Peter Pan character. Readers who are only familiar with the Disney incarnation are in for a surprise, because this is a dark and brooding tale aimed at adults, not kids. Loisel shows us how a young lower-class kid named Peter came to be Peter Pan, how the Pirate Captain became Captain Hook and how even seemingly lovely fantasy lands can have terrible secrets. 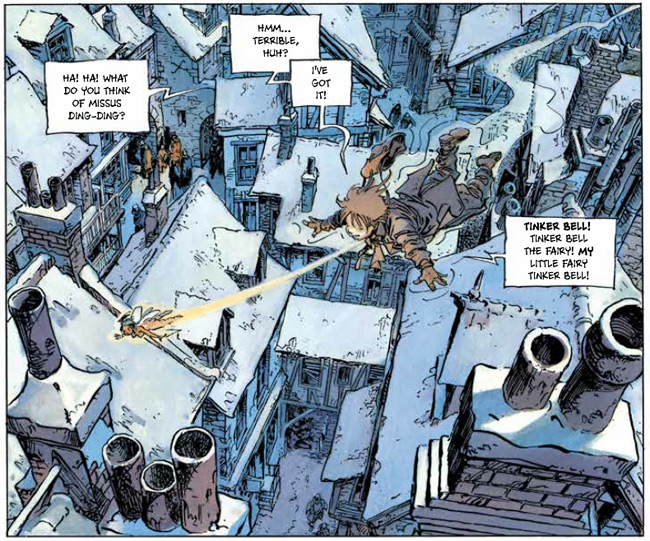 London, Winter 1887. Peter is a young boy who entertains his friends with stories and fantasies. Because all his friends live in an orphanage, one particular popular subject is Peter’s mum. They like to hear about how loving she is and how much she likes to take care of her little boy, which is as far from the truth as possible: Peter’s mum is an alcoholic who hates Peter’s guts. His only adult friend is Mister Kundal, the proprietor of a bar who feeds Peter food and stories. The world Peter lives in is very unfriendly to kids and all adults seem to be lowlifes craving booze and sex. It’s like Dickens with raging hormones. Peter basically hates all adults, except Mr. Kundal, and despises the sexualised Victorian London he lives in so much that he vows to never grow up and become a ‘dirty’ adult. When Peter’s mum has kicked him out of the house, he spends the night at the docks. Then a fairy appears whom Peter names Tinker Bell. She lets Peter fly through the air and takes him with her to Neverland, where fantastical creatures of all sorts welcome him as their savior from the dreaded Pirates that try to steal their treasure.

Peter, being the product of his times and upbringing, is quite the foulmouthed misogynist, calling Tinker Bell a slut at times, but basically is as stubborn and egotistical as every kid his age. On a side note: as if Pete’s world wasn’t dark enough, somehow Loisel ties Pan’s origin to the legend of Jack the Ripper as well. So yes, this Peter Pan-story is a bit on the dark side, but still Loisel offers a delightful adventure with well-rounded characters.

That’s all I want to say about the set up of the story, actually, because this comic’s wonders are best discovered by the readers themselves. Just prepare yourself for a wild, interesting and at times violent ride. The artwork by fantasy veteran Loisel looks stunning and lively; Tinker Bell has never looked so sexy. But be careful with this feisty little fairy, because she gets quite jealous and can be ruthless.

Peter Pan was originally published in France in six volumes between 1990 and 2005. Last year Soaring Penguin Press published the first English translation including all six albums in one big, high quality omnibus. I am surprised it has taken so long for an English version of this book to appear, but better late than Never(land), I’d say.