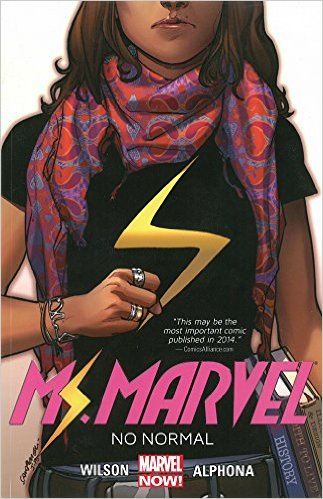 Kamala Khan is a sixteen-year-old Pakistani-American girl from Jersey City. She idolizes superheroes and Carol Danvers in particular. Danvers is a super heroine who calls herself Captain Marvel (she used to be Ms. Marvel). Kamala has a hard time fitting in: she is a Muslim and her parents try to bring her up according to their faith. Obviously, they don’t like their teenage girl to go to parties where boys attend as well and alcohol is being served. Her older brother spends his time praying all day, wearing traditional clothes, much to the chagrin of their father who’d rather see his son get a job. Kamala is living between two worlds, not really fitting in with either of them. Some of her white American school buddies, particularly Zoe, have no problem pointing out that she’s the odd one out.

When Kamala is bestowed superpowers, her life gets even stranger. All of a sudden she can change her appearance to whomever she wants, even her mother, and she can stretch her body to become very big or very small. She also heals a lot faster than before. Kamala becomes the new Ms. Marvel.

The way Kamala gets her powers is a bit vague. On a foggy night, she has a vision or hallucinates Carol Danvers, Iron Man and Captain America. These all-American characters start talking to her in Urdu and they bestow her new powers on her. How is never really explained and all this seems like some sort of divine intervention or magic. Being an atheist, I usually don’t like my superheroes mixed up with religion, and I prefer a more ‘scientific’ explanation on how superheroes get their powers. 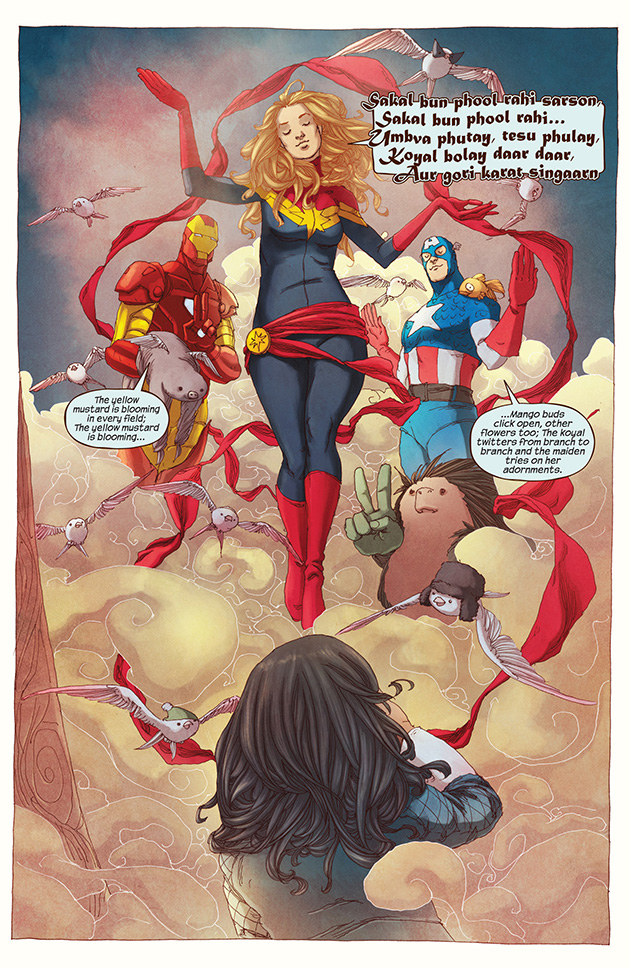 Kamala is actually the fourth character called Ms. Marvel in the Marvel Comic books, but she’s the first Muslim character to headline her own book. This was presented as a big deal when the series started and is part of a larger strategy by the publisher to reach new readership outside the traditional white male demographic. For a while now, they particularly try to cater to minorities that until now had to play second fiddle in the world of superheroes. So Marvel came up with Black Hispanic Spider-Man Miles Morales, African-American hero Sam Wilson taking over as Captain America, and a whole reign of female superheroes who are either counterparts to known male heroes or pressed from a new mold that has an emancipatory flavor.

This is not to say that there were never any so-called minority superheroes in the Marvel Universe, quite the contrary actually, but in the last couple of years there has been more focus on such characters. Also, when it comes to the casting of Marvel characters in movies, some comic book characters that are white are now being portrayed by black or ethnic actors. Not all readers are happy with this trend. 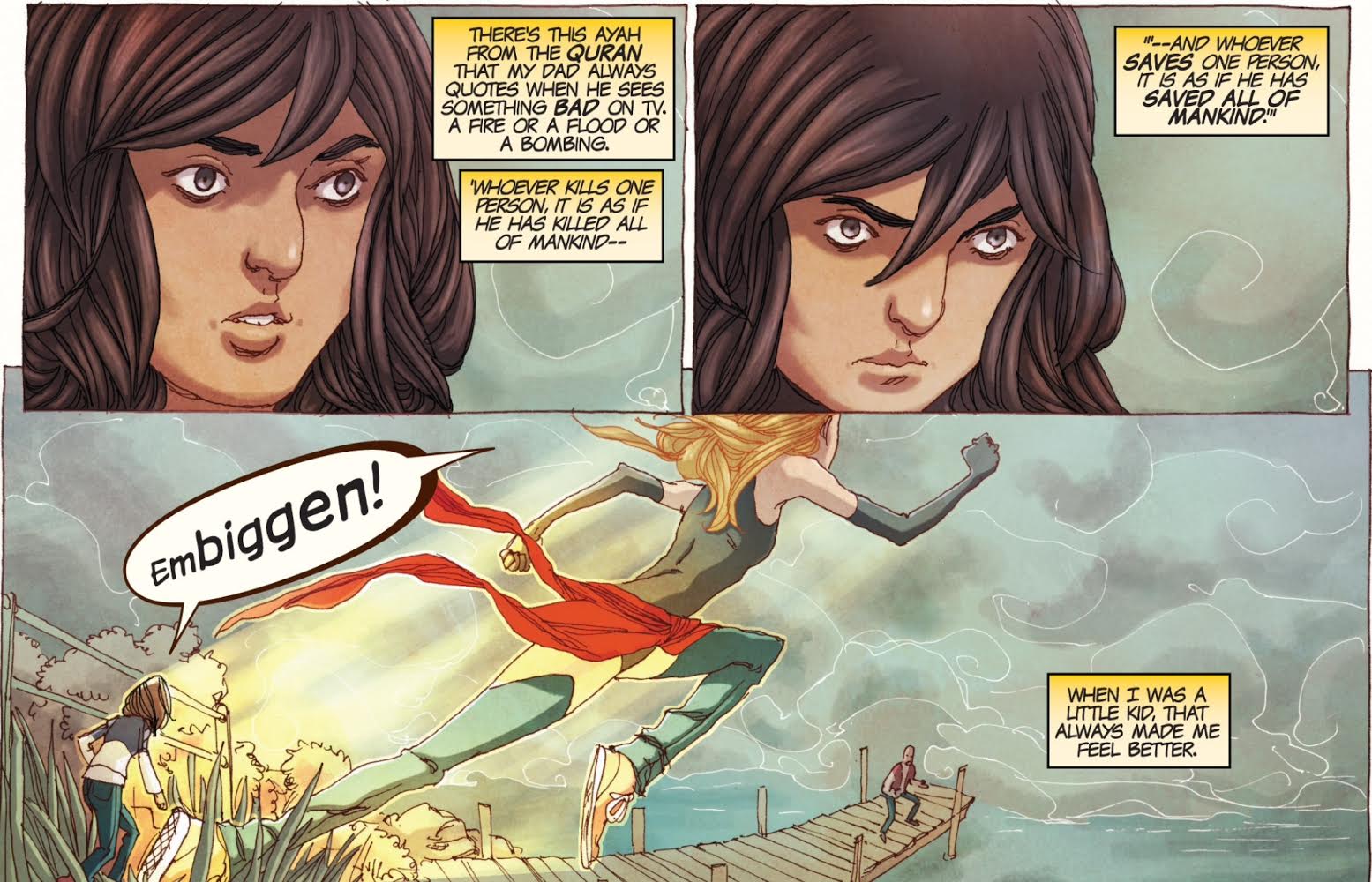 But, politics aside, is this Ms. Marvel comic a good read? I think it is. Firstly, because Kamala and her co-stars are rounded and interesting characters. Writer and co-creator G. Willow Wilson takes the time to develop the character and sketch out the world she lives in. I like the fact that Kamala has to learn how to use her powers. In this first storyline learning to cope with these powers is an important factor. The story is also about trying to determine your identity, accepting who you are and not being afraid to show it. These are important issues for teens, and typical for coming-of-age stories. Then again these issues stay with us for the largest part of our lives. At first Kamala changes her appearance into a white, attractive blonde, just like Danvers. Later on, she decides the new Ms. Marvel might as well look Pakistani and her hero-self looks more like Kamala looks in real life. Personally I thought Wilson puts this theme of identity on a little thick, but then again: she does get the message across this way. 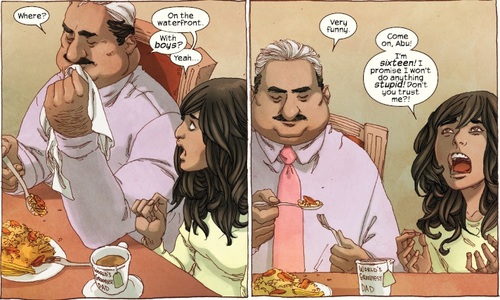 What makes this comic stand out from other Marvel titles to me is Adrian Alphona‘s art work and the coloring by Ian Herring. Alphona is a Canadian artist that is best known for the series Runaways. He created this new Ms. Marvel together with Wilson and editors Sana Amanat and Stephen Wacker. Alphona’s style is a blend of realism and a more cartoony way of drawing, and that works very nicely with a superhero that can stretch her body. Interestingly, it looks like his pencil drawings are scanned and not inked. Therefore there are no black areas in the artwork. Herring’s bright color scheme compliments the drawings perfectly, adding shade and a lively sort of mood.