With Kick-Ass 3, the saga of the teenage real-life superhero Kick-Ass and the even younger but more badass Hit-Girl comes to a close. It’s a smart and worthy finale to one of the best original series published today. 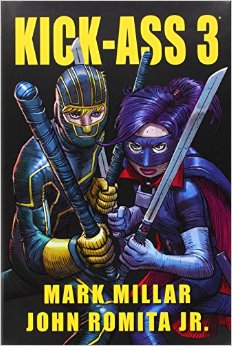 Writer Mark Millar and artist John Romita Jr. have created a wonderful series with a very original angle: a high school teenager, a big fan of comic books, decides to become a real-life superhero. But in real life superheroism is not as easy as it might seem on the comic book page. Chances are, when you confront a robber you get your ass kicked. Dressing up as a superhero doesn’t necessarily make you one. And Dave Lizewski, the main character, has learned that the hard way, as one could have read from past storylines in the series. I am a fan of the series, and wrote about past volumes before on this blog.

The series has spawned two feature films and now comes to an end with Kick-Ass 3, a story which, as far as Dave Lizewski is concerned, is all about growing up. In the previous installment, Kick-Ass 2, Hit-Girl and Kick-Ass took on the mafia and won, but the cost of this victory was high: Hit-Girl got arrested while all real-life superheroes got outlawed. Kick-Ass and his team Justice Forever are biding their time while Hit-Girl is waiting in vain for them to rescue her from prison. After Dave graduates high school he and his roommate Todd start working at a fast-food joint. Meanwhile mafia boss Rocco Genovese returns from exile with a grand plan to unite all the East Coast crime families. Rocco is a psychopath that likes to kill his enemies with a solid gold ice pick. 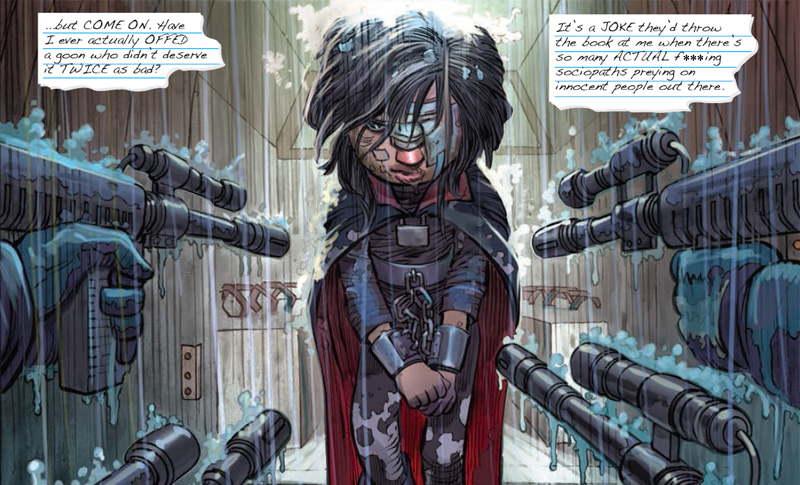 With Hit-Girl behind bars and the police in Rocco’s pocket, the mafia seems to be unstoppable. It’s up to Dave and his gang to put an end to their crimes, but the best they can do is try to intimidate the mafia by re-enacting scenes from old Batman-comics and the execution of these little play acts aren’t exactly going as planned. And how is Kick-Ass to stop the mafia anyway when he can’t even get rid of The Juicer: the newest member to the team of superheroes that uses their headquarters as his own apartment and laundry basket while he’s playing videogames all day? The Juicer’s superpower seems to be slacking and being obnoxious.

I really enjoyed the personal growth Dave experiences in Kick-Ass 3. While Hit-Girl basically stays the same character, Dave is about to grow up. When he falls in love and gets a girlfriend for the first time, Dave starts to skip meetings with the team. He chooses to have sex with Valerie instead. (Who could blame him?) While the persona of Kick-Ass gave him some prestige, now Dave has met someone who likes him for who he is without the mask and he starts to detach himself from the superhero lifestyle. That is, until the mafia tries to kill Hit-Girl and they have to team-up one more time. The climax is as one could expect from a Kick-Ass story: bloody violent and funny at the same time. But then again, the comic is not meant for young readers.

Kick-Ass 3 has hard-edged action and a lot of humor. One could see this series as a parody of superheroes taking a piss at comic book readers because it makes fun of conventions and geek-dom. Let’s face it: it’s fun to see Hit-Girl wielding a sword and chopping off the heads of bad guys, but when you realize she’s only supposed to be about 12 years old, you understand in real life she would never have the strength to execute such actions, which not only shows how ridiculous these superhero narratives can get, but also shows this aspect is part of what makes Kick-Ass so enjoyable. At the same time it’s also a celebration of the genre and as Millar has told me in an interview in the past, it’s his love letter to superhero comics.

When the going gets really though for Dave and he’s about to give up, regretting all the time wasted on reading comic books, he has a vision of his parents telling him how much comic books can inspire. ‘Reading COMIC BOOKS is what got you through the TOUGH TIMES, Dave,’ his mom says. His dad adds: ‘Your mother’s right, son. And it wasn’t just the ESCAPISM they gave you. It was the OPTIMISM they instilled in those twenty-two page CHUNKS.’ 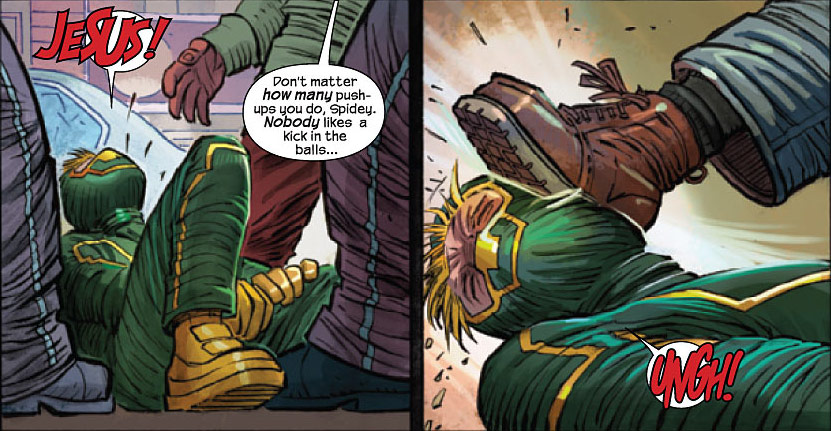 What I particularly like about this installment is that Millar has an eye for the effect the actions of supervillains have on the lives of people close to them. For instance, Chris Genovese’s mother Angela suffers a great deal because her kid tried to be the super villain the Motherfucker and has killed people. While walking down the street, family members of the victims spit in Angela’s face. Her son is a great disappointment and while Chris is whining his life didn’t turn out like he planned to, she thinks to herself: ‘You think this was MY PLAN. You think I grew you for nine months and fed you my milk just to watch you become a FIGURE of PUBLIC HATE? Your father only killed people for BUSINESS. You killed people for FUN.’ These kinds of characterizations make the Kick-Ass series a wonderful study of many aspects of the superhero genre. I believe the story has run its course and with Kick-Ass 3 has a worthy finale. It has been a wonderful adventure and a lot of fun.