There’s more than meets the eye in In Real Life, a little moral story about online gaming. 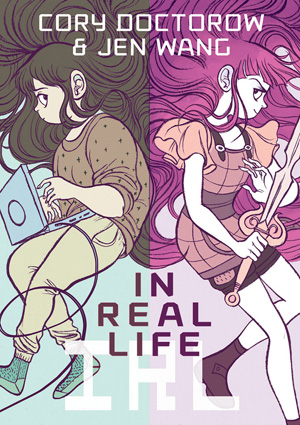 Teenager Anda just moved from San Diego to Flagstaff but has no problem fitting in with the other smart and nerdy kids in high school. Anda loves playing Coarsegold, an online multiplayer role-playing game where she spends most of her free time. Within the game-environment she can be a very skilled female warrior and meet people from all over the globe. At first she teams up with Lucy aka Sarge to make extra money by stopping and killing gold farmers: players that collect valuable objects and then sells them to other players for money. This behavior is against the rules of Coarsegold, but when Anda befriends one of these gold farmers, she discovers he’s a poor Chinese kid who works 12-hour days within the game to make some money. All of a sudden the questions about what is considered right or wrong are not as clear as they used to be.

Cory Doctorow, Boing Boing editor and writer of successful science fiction books, shows with In Real Life that actions within the virtual world are connected to what happens to us in the real world. As he explains in the introduction: ‘I hope that readers of this book will be inspired to dig deeper into the subject of behavioral economics and to start asking hard questions about how we end up with the stuff we own, what it costs our human brothers and sisters to make those goods, and why we think we need them […] It’s not surprising that gamespace has become a workplace for hundreds of thousands of “gold farmers” who undertake dreary, repetitive labor to produce virtual wealth that’s sold to players with more money and less patience than them.’

All this may sound a bit preachy and although In Real Life might be considered what we call a moral story, Cory Doctorow and artist Jen Wang never stuff their message down your throat. Instead they’ve created an entertaining comic book that will appeal to young adults, and especially gamers. I believe it will create a superficial awareness of the workings of behavioral economics. However, it would have been nice if the book included some suggestions for further reading.

Writer/Artist Jen Wang (Koko Be Good) uses a very recognizable and accessible drawing style that could be characterized as Disney meets Manga for In Real Life. The book is actually an adaptation of a short story by Doctorow. He and the artists worked very closely on the script for the comic. 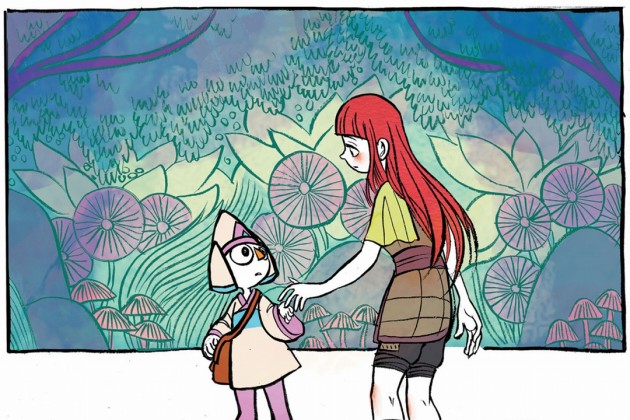 Wang contrasts the real world and the fantastical environment of the online game by using earthly, brownish and reddish colors for the former and bright colors for the latter. In an interview with Comics Alliance she explained her approach to the coloring of the story: ‘Since I was drawing the real life and Coarsegold scene similarly, the best way to separate the two was to color them differently. From Anda’s perspective her real life is dull and uninteresting, so all those scenes have a brown filter over it. It’s not so gross or depressing as to be a grey or blue, but definitely something that’s down to earth and homogeneous. The Coarsegold scenes, in contrast, have a multi-colored layer on top of the normal color layer, so everything’s just a little extra saturated and textured.’