Sometimes you just don’t ‘click’ with a story and for me this is the case with Umbral, Book One: Out of the Shadows, a so-called dark fantasy story that takes place in the fictional Kingdom of Fendin, a world in which magic and religion are forbidden.

The story is about a young thief named Rascal. During an eclipse she sneaks into the Red Palace and tries to steal a priceless royal gem called the Oculus. She gets help from Arthir, the crown prince. Together they witness the horrific murder of the King and Queen at the hands of the Umbral: nightmarish, Lovecraftian creatures from another dimension. When the creatures kill the young boy as well, Rascal can barely escape the palace alive. With the Oculus in her possession Rascal tries to flee and outrun the Umbral. Interestingly, the Umbral are able to take on the shape of the people they’ve killed, making it hard to figure out whom to trust. On the way, Rascal gets help from a drifter named Dalone, who might be a wizard of sorts.

I’ll admit: I’m not a big fantasy buff, but as a reviewer I’m willing to try and read any comic that I come across. I thought the cover of the comic looked intriguing. Speaking of the interior art by Christopher Mitten, I have mixed feelings. On the positive side, I like the look of the Umbral. With their dark and shadowy form, bright red eyes and large mouth with sharp teeth they indeed seem to be creatures that will devour you in your nightmares. Storytelling-wise, Mitten is all over the place and from a visual standpoint the narrative flow feels a bit disjointed at times. It also doesn’t help that some of the characters look alike a lot and are hard to tell apart. For instance, Dalone and Master Gearge, master of the thieves’ guild, could have been twins. They’re both big-bearded men and father figures to Rascal. 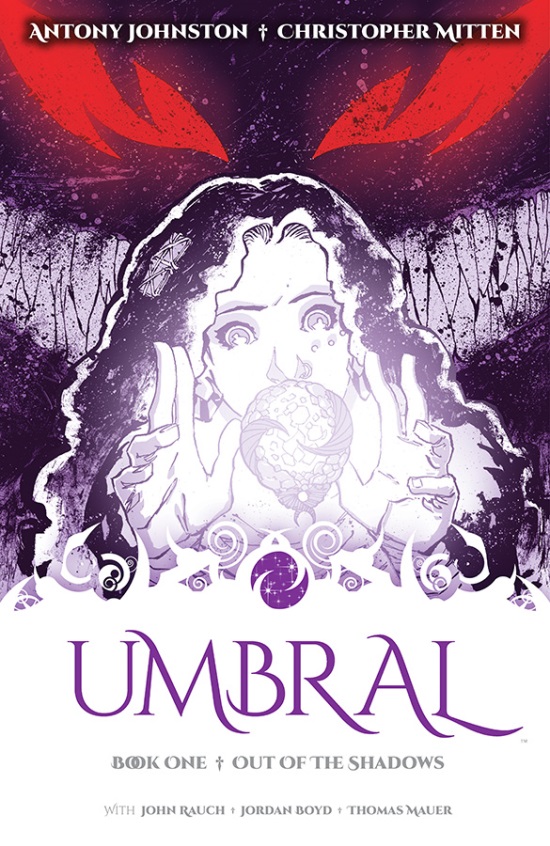 Of course it is nice that the main character is female, and a teenager at that. But Rascal is a young, spunky girl with a potty mouth that frankly isn’t very interesting as a character. Nor are most of the other characters, to be honest. As a whole, Umbral Book One is pretty bland. It seems writer Antony Johnston (The Fuse, Wasteland, Dead Space) put some familiar tropes of the fantasy genre in a blender and this is what he came up with, throwing a bunch of ghost pirates in the mix as well.

Reader be warned: this first volume ends with a annoying ‘to be continued’ sign, so after almost 170 comic pages of chasing, cursing and violence, nothing really gets resolved. To be honest, I don’t think I can muster the enthusiasm to pick up the recently-published second installment of the story.