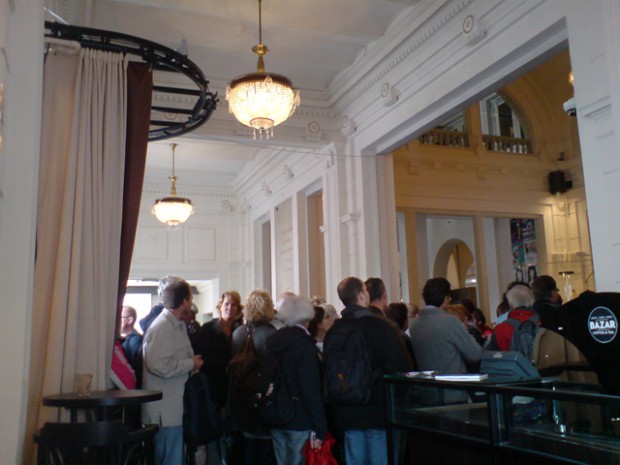 Stanislavski, 3:00 pm
Last weekend it was Uitmarkt in Amsterdam. The Uitmarkt is the national opening of the cultural season and the largest cultural festival in the Netherlands. Visitors get a taste of what is to come in the cultural season and see free samples of musical performances, theatre, film and all kinds of other cultural outings. Since a lot of people come to town, it basically boils down to standing in line for long lengths of time. I took this shot while waiting for Liselotte, my coffee date for Sunday. What you see is only a small portion of a very long line of people, waiting to get into the theatre to see a free preview. When Liselotte arrived a few moments later, it was so crowded that we could forget about getting a cup of coffee, so we moved to Vertigo in The Vondelpark. It was pretty busy there too, but they only forgot to bring us the second round of drinks this time. Which, considering, isn’t a bad score for Amsterdam catering.