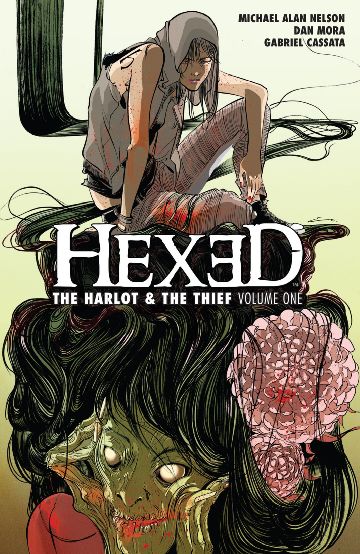 Right off the bat, Hexed: The Harlot & The Thief starts on a great note: the young and resourceful Lucifer breaks into a museum and encounters three highly-trained and well-equipped thieves. Since they’re after the same painting as she is, a confrontation is inevitable. Lucifer cheekily remarks that the guys look like Space Ninjas and are pretty over-equipped for this kind of job, since the museum is only guarded by a security guy named Bob, who takes the stairs to lose some weight since his engagement and will take a while to reach their floor. Apparently, Lucifer is a thief who does her homework, and only brings what she deems necessary to do the job. Although one of the guys points a gun at her and threatens to kill her, Lucifer seems hardly impressed. She relaxes against a wall, carves some kind of symbol in the apple she was eating and conjures up an enormous snake-like creature to deal with the ninjas, while she deals out some punishment herself.

But it gets even better. Bob walks into the room, but before he can stop Lucifer, the poor guy gets a heart attack from all the stairs he’s been taking. To save Bob’s life, Lucifer temporarily puts him inside the painting she came to steal! She takes it to Val Brisendine’s art gallery, Val being the woman Lucifer was stealing it for in the first place. When Lucifer steps back into the painting to get Bob out, she accidentally unleashes a very bad guy that was being held captive inside it as well. This sets up a very entertaining story in which Lucifer not only has to try to stop the bad guy, but she also has her life threatened by the woman who put him in the painting, meanwhile dealing with the Harlot and traveling into The Shade to save a colleague’s soul. (The Shade is a kind of way station for souls. When you die, you pass through it on your way to whatever afterlife awaits you.) 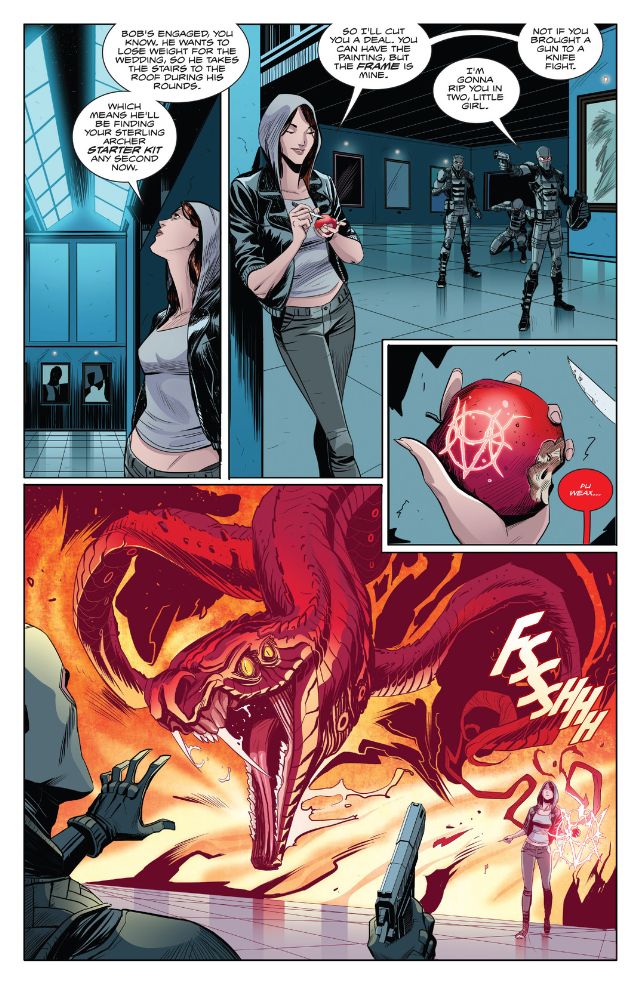 From the moment Lucifer put Bob into the painting, my curiosity about this character and her world kept growing and growing. I like stories with a magic-realistic touch. And the action in Hexed… contains quite a few elements that are not of this world, but are highly entertaining to read.

Lucifer and the other characters were introduced in the mini-series collected in the trade paperback Hexed, published a couple of years ago by Boom! Studios. Lucifer, full name Luci Jennifer Inacio Des Neves, is a creation by Michael Alan Nelson, who also wrote this volume of Hexed: The Harlot & The Thief. Lucifer is a supernatural thief-for-hire, stealing wondrous objects from the dark denizens of the netherworld for her mentor Val Brisendine. She’s also the heir of the Harlot, the powerful magic witch that looks like Helena Bonham Carter on a bad day. If a live-action adaptation will ever by made out of this comic-series, Bonham Carter would be the only choice to play the Harlot.

I liked Lucifer’s cheeky and smart voice-over dialogue, which reminded me of typical inner voices by detectives and the smart-mouthed characters from Buffy the Vampire Slayer. Also, it’s a woman’s world: Nelson presents interesting female leads. Lastly, what I really liked about the art work by Dan Mora is the fact that every time the characters are inside a painting, everything we see is rendered through the art-style of that particular painting.

The only problem I had while reading this story is paradoxically also the magical element of this tale: magic seems to solve everything and Lucifer seems to be quite invulnerable; even being dead for a while doesn’t really bother her. So I never had the feeling the danger she was in was insurmountable.

But maybe that will change in the following installments of the series. Hexed: The Harlot & The Thief is only volume one, containing the first four comics. Volume 2 is out this month, and volume 3 is slated for August.