Dave Lizewski is just another ordinary American Teenager: he likes girls (but can’t get a date) and he loves videogames and comic books. One day he has an epiphany. ‘Why hasn’t anyone tried to be a superhero in real life?’ he asks himself, and decides to become one. Dressed up in a green bodysuit and a ski mask and armed with just a pair of batons he calls himself Kick-Ass. After walking around in his suit for weeks without doing anything really, his first act as a superhero is an attempt to stop three loitering hoodlums painting graffiti. They beat Dave into a pulp and stab him. When Dave stumbles into the street, he gets hit by a car. This experience answers his question: nobody dresses up as a superhero in real life because when they do, they get their ass kicked. 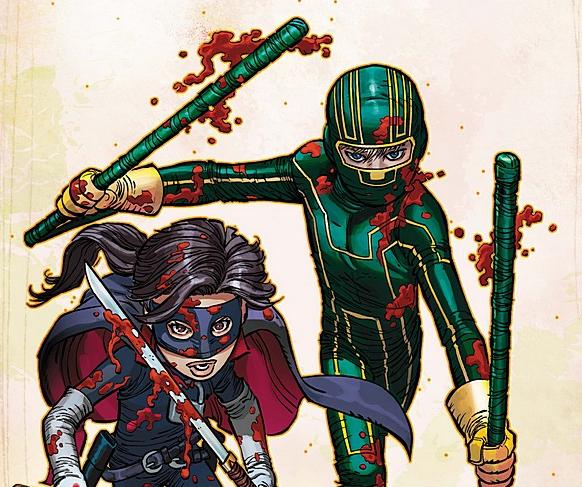 In the hospital it takes numerous operations – they fit three metal plates inside his head – and after weeks of recovery and physical therapy Dave is well again. Before we know it, he’s back hitting the streets. After one of his fights ends up on YouTube, Kick-Ass is an overnight success, and more people start to dress up as superheroes. Like the mysterious Red Mist, who seems to steal the spotlight from Kick-Ass, and Dave doesn’t like that one bit. Soon he’ll learn there’s more to Red Mist than he suspects. Of all the hero-wannabees Hit-Girl and her partner in crime Big Daddy seem to be the genuine article. Although Hit-Girl is only ten, she’s a lethal weapon all by herself and soon things get very, very violent when they take on the mafia. 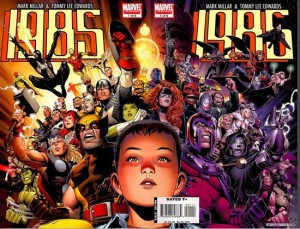 interesting concepts. In Marvel 1985, a limited series Millar wrote a couple of years ago, the baddies from the Marvel Universe all of a sudden show up in the real world and make havoc. Young Toby Goodman has to travel to the fictional world of Marvel to get help. In Superman: Red Son Millar explores the notion what would have happened if Superman’s rocket landed in Russia instead of Kansas, making him a communist hero. Millar also wrote hits like Wanted, which was turned into a film starring Angelina Jolie, and worked with John Romita Jr. on Wolverine: Enemy of the State.

Romita Jr. is one of the best artists working in the comic book industry today. For the past thirty plus years he’s drawn every major Marvel Comics character including Iron Man, Spider-Man and currently Captain America. Romita is a brilliant visual storyteller: he always puts ‘the camera’ in the right spot and makes sure he presents the story in a clear, exciting way. One can read his comics just by looking at the drawings.

The first Kick-Ass comics inspired a film by the same name by director Matthew Vaughn, but this was not just a carbon copy adaptation. The comic book series had only just begun when the film was being written and shot, so the screen story deviates a bit from the comic book. Which is a good thing, because that way both stories are worth looking into. This summer the sequel Kick-Ass 2 is coming out, and that flick is based on the comics part two and part three in the series, respectively titled Hit-Girl and Kick-Ass 2. 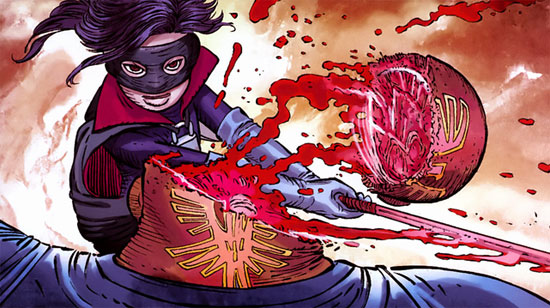 Hit-Girl is a great follow up to the original Kick-Ass comic and deals with the daily adventures of the title character. Although Mindy McCready as Hit-Girl could slice a mafia hoodlum in half with her sword without breaking a sweat, she has a hard time leading a normal life and blending in with her high school classmates. How can she outsmart Debbie Forman, smart-mouthed queen bee of the seventh-graders, if she doesn’t even know what Justin Bieber’s latest album is called and what the hell The Hunger Games are? This is where Dave Lizewski comes in. While Hit-Girl teaches him a thing or two about crime fighting, she learns from Dave what TV series are hip and what songs to put on her iPod.

When Red Mist and the Genovese gangster family try to get revenge on Hit-Girl and Kick-Ass for what they did to the Family in the first comic series, it’s just a matter of time before Mindy and Dave have to suit up once more.

Real-life superheroes
In the third story, Kick-Ass 2, Millar and Romita take the concept of real life superheroes up to a new level when Kick-Ass joins a superhero team. Besides chasing criminals, they also consider more mundane actions such as distribute blankets to the homeless and volunteer at a local hospice. (Stuff we never see DC Comics’s Justice League do.) This shows that Millar is really into tabs on the real-life superhero thing, which is a phenomenon that exists for real in the United States: people dress up as superheroes not so much to fight criminals but to help homeless people or volunteer to help other people in need.

Since Kick-Ass 2 is a comic book, soon things get really ugly and violent when Red Mist, now calling himself The Motherfucker, wants to be the biggest supervillain known to men. He and his group of hired thugs start a violent rampage targeting Kick-Ass’s family and friends and they leave a nasty, bloody trail of victims. 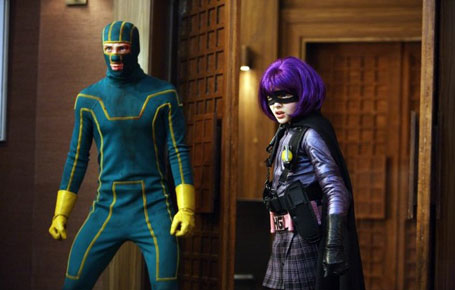 The Kick-Ass stories are a wonderful, satirical take on the superhero genre, with a lot of humorous nods and winks at the comic book scene and contemporary popular culture. The humour makes the ultraviolent action sequences digestible for most readers. However, I had the feeling that in Kick-Ass 2 the creators went a bit overboard when for no particular reason the Motherfucker shoots a bunch of kids and adults in a quiet street in the suburbs. Although the depiction of violence has always been a big part of the story in the series – for example: when the mafia in the first series interrogates Dave they torture him and electrocute his scrotum – in Kick-Ass 2 the violence seems even harsher, even more in your face than before and this time it’s presented with little humour to lighten things up. I would say this kind of satire is probably not for the faint of heart.

Still, the artwork looks great, and on the whole, the Kick-Ass series is definitely worth reading for anyone who loves superheroes or likes to take a piss at dressed-up comic book characters. Needless to say: I am looking forward to the third series and the upcoming movie.

This review is published on the ABC blog.

[…] concepts that deliver most of the time. Millar is the co-creator behind titles such as Kick-Ass (which I reviewed earlier), Wanted, The Secret Service and Marvel’s Civil War. If some titles sound familiar to you that […]

[…] Writer Mark Millar and artist John Romita Jr. have created a wonderful series with a very original angle: a high school teenager, a big fan of comic books, decides to become a real-life superhero. But in real life superheroism is not as easy as it might seem on the comic book page. Chances are, when you confront a robber you get your ass kicked. Dressing up as a superhero doesn’t necessarily make you one. And Dave Lizewski, the main character, has learned that the hard way, as one could have read from past storylines in the series. I am a fan of the series, and wrote about past volumes before on this blog. […]